A musical band that combines all genres and represents the beauty of hope, love and strength through music.

We are a fairly new musical band made up of 7 musicians that compose, record and perform our own music.

The EXTREMELY special thing about this band is that we all come from different musical backgrounds. And this… makes for some very interesting music.

We play all genres.

The other amazing thing about this band is we started as friends first!

We actually all were hired together to play at a church called “The Table.”

We would play all sorts of music at this church, from Prince, to The Beatles, to jazz and more.

After 5 years of playing together inside the church, Brenden Lowe, the music director got the brilliant idea of saying, “Hey! We sound great together. Why don’t we form our OWN band outside of church to write our OWN music.”

And that’s exactly what we did. 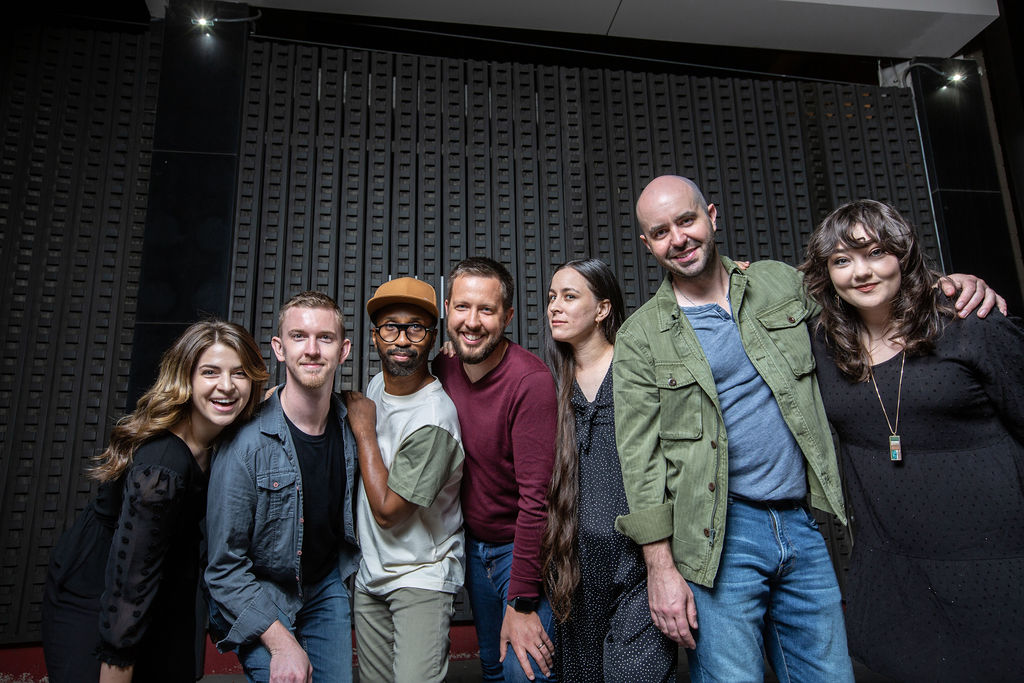 What does Solabel mean exactly?

You may be curious about how we came to the name SOLABEL.

Our name for the band comes from a number of different things.

In no particular order, the first being centered around hope, love, and inspiration, and we thought light represented all of that so we wanted to capture the word light in the name.

To do this we started with the word “Sun”, and this turned to “Solar” which eventually turned to “Sol” which is the Spanish word for sun.

The second characteristic we wanted to capture in our name was beauty.

This came easy to us through the French word for beauty which is “belle”.

The third characteristic we wanted was sound and music, because we’re a band.

So we shortened the word belle, to bel which was a play off the English word bell, which resembles sound.

So we first had “Solbel”

But that didn’t roll off the tongue quite right so we added the “a” in between because it created “so” and “la” which are musical references to notes.

A made up word which essentially is defined by us as “The beauty of light and sound.” Or in other words…the beauty of hope, love and music.

Unfortunately our funding has been depleted and we’re in need of some support for the final stages of the album.

So far, we’ve gone with the best of the best through out this entire album process.

Mixing & mastering are the final stages of our album and we want to make sure the engineer’s we hire to do this are also the best of the best.

That is why we have selected Bryan Cook as our mixing engineer.

He as mixed music for bands such as U2, Katy Perry, One Republic, Switchfoot, Aloe Blacc Feat J.I.D, Jeff Goldblum, and the list goes on and on.

If we have anything left over, that will go towards renting a theater in Sacramento for our album release concert.

We’d love your help in crossing the finish line with our debut album and to be apart of our very first project.

There are many ways to get involved and all of them include your very own signed hard copy CD of our debut album after it is finished.

Some of the other tiers include

….all the way up to a private concert at the location of your choice by Solabel.

Every member of Solabel wrote down their personal values and intention for the group.

Here are our values and representation within the world.

We strongly believe our music will represent all the values above and will do wonders for changing the world.

In the summer of 2021 we went on a 3 day writing retreat. In the span of this 3 days we wrote 8 new songs which have all now been recorded and edited.

We also just got back from our second writing retreat in July of 2022 and within the same 3 day span wrote 11 NEW SONGS!

Needless to say, creativity and music is our jam. And we can’t stop, won’t stop.

Click the links below to listen to samples of the music that will be on this album!

“How To Survive In The Woods”

The timeline for us is the most difficult obstacle we’ll face. Everything is so fluid so it’s hard to nail down when things will move along.

We’ve already begun communicating with the mixing and mastering engineer we’re certain we would like to use.

We’ve also confirmed the venue for our album release concert as well.

The unknowns are how much money we will receive from this Kickstarter and how fast the mixing engineer will be able to complete the work.

We’ve planned far enough out in advance that we’re confident everything will come together to work.

Other Ways You Can Help

Even if you just look at this and support us mentally, we still see you and appreciate your love.

If you can’t donate financially, sharing this campaign through social media, with your friends and family will help us out TREMENDOUSLY.

You can use the share tools to do this quick and easily.

The power of connection of and community go a long way.

Thank you for taking the time to consider helping us!

Music lives on forever and so will this.

Make a pledge without a reward

Get an official hard copy CD of our debut album sent directly to your house so that you can listen in your house, in your car, or just use it as a coaster. Your album will personally be signed by every single member of Solabel so that when we get famous your CD will be worth $1 more.

As a super fan you’ll get a signed copy of our debut album, and a free ticket with vip seating to our album release concert! VIP means your up front and close so you can high five us in between songs.

Get everything above plus a very warm credit in our debut album liner notes! We love recognizing those who contributed and it’s a great way for your contribution to live on forever and actually BE in the release.

Get everything above plus a personalized video of Solabel covering your favorite song! No matter what artist and song you choose, we can do it! Challenge us, I dare you. We’ll also send you a personzlied mp3 of happy birthday that you can use to send to your friends and family on their birthdays!

Everything above plus Solabel will personally write a song for you based on the topic and genre of your choice. Who doesn’t want to have a song written for them or about them? Honestly. You’ll receive a digital mp3 recording of this song along with the sheet music, chords, and lyrics to your song.

Everything above and Solabel will perform a personal concert for you, your friends and your family to attend at the location of your choice. Your own personal concert by Solabel wherever you choose. It’s party time!!